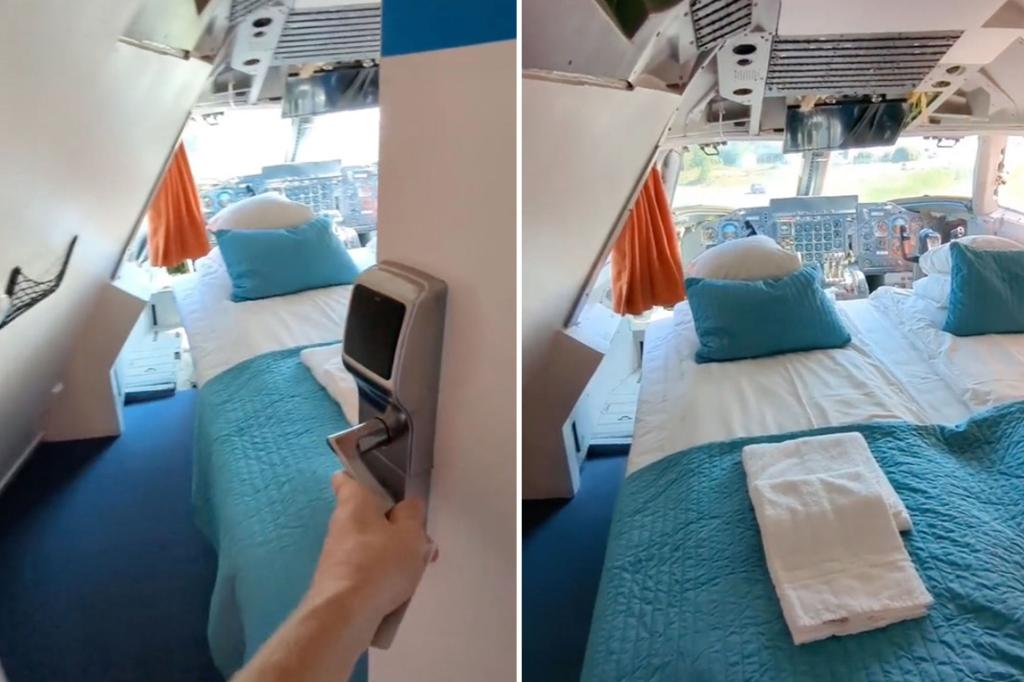 Can’t sleep on planes? That’s because you’ve never been on this one.

A grounded Boeing 747 that was converted into a hotel a number of years ago is having a moment on TikTok, where viewers got a reveal of what it looks like on the inside.

“Would you spend a night at the Jumbo Stay Hotel?” reads the caption on a video tour of the former commercial plane, posted to TikTok this month by travel website The Points Guy. The minute-plus clip of the Jumbo Stay, which is parked at Stockholm Arlanda Airport in Sweden, has been viewed more than 126,000 times since being posted six days ago.

The jet used for the hotel was originally built for Singapore Airlines in 1976 before changing hands multiple times — and ultimately ending up in Sweden after its final operator, Swedish charter Transjet, ceased operations in 2002. Jetliner 747-212N has been parked at Arlanda ever since, The Points Guy reported.

In 2008, the vessel was stripped for parts and transformed into a one-of-a-kind stay complete with single rooms, dorm-style rooms and various amenities. The cost? A whopping $3 million. It opened for business later that year. Currently, prices per night range from $44.57 for a bed in a four-bedroom dorm to $118.36 for a private room with an ensuite bath, according to the Points Guy.

“It is much more of a hostel than a hotel, and the prices largely reflect that. Don’t expect room service or a fitness center here,” the site’s post about the aircraft notes, adding that the most prime room on the plane — the cockpit suite, which still maintains the plane’s original flight controls — is fairly expensive but “for an aviation fan, it was a once-in-a-lifetime experience that was well worth the investment.” It’s large enough for a queen-size bed.

As for other perks, visitors can walk on the wings of the plane, which now has tables and chairs, for nibbles and sips al fresco. Part of the main cabin was even converted into a retro-looking dining area, where buffet meals are served, and the plane’s likely previously small lavatories have been grown into large full bathrooms.

While extremely unique, Stockholm isn’t the only place boasting grounded experiences in former jetliners. Another Boeing 747 known as the BA Negus “party plane” in the United Kingdom is available for hire as an events space and bar, The Post previously reported.

Near Bangkok, another Boeing 747 is currently in use as a cafe — and stateside in Hapeville, Ga., the Delta Flight Museum is located inside a transfigured Boeing.