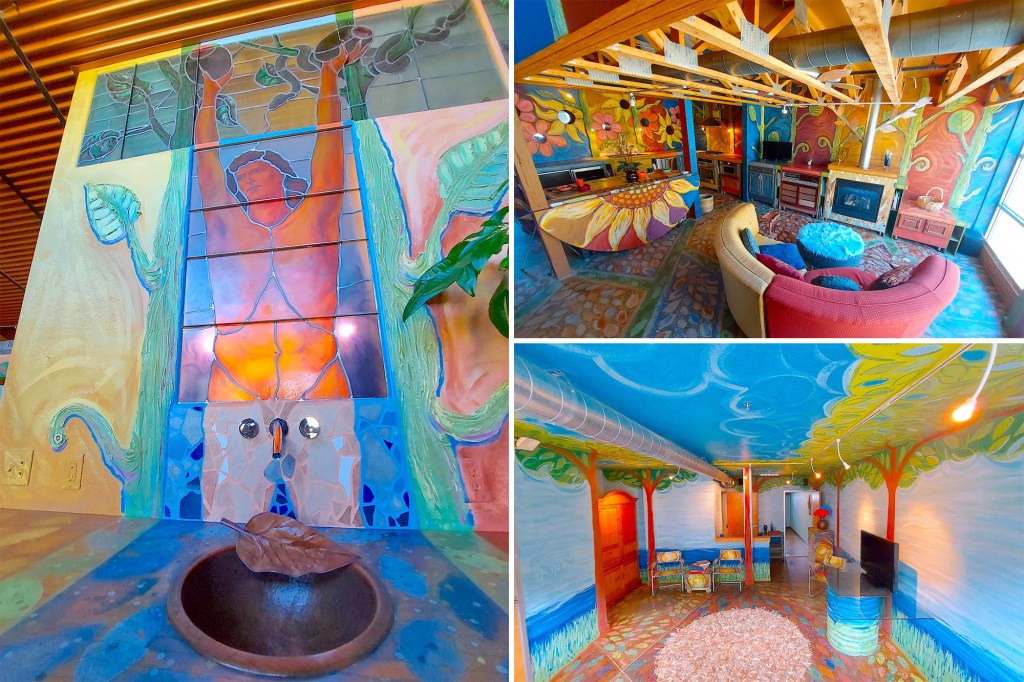 You’ll have no troubling turning on this faucet.

A nude Adam in the Garden of Eden is muraled on the walls of this Wisconsin kitchen — and the 3D art uses a working faucet in place of his manhood.

“I introduced themes and images of ‘stories’ growing up and mixed them with the beauty and color of nature and the human form to create a kaleidoscope of happiness, humanity and life,” the artist Jeff Seymour told Jam Press.

The kitchen also has a rounded sunflower headboard recycled into a kitchen counter, a butcher block from a church renovation and a bowling alley used as the bar. Wood and metal pieces from a bin during the building’s construction are used throughout.

“I love this! It’s so fun and colourful! That painting over the sink cracked me up! I’d keep it as is and have everybody over haha!” one person commented when pictures were posted on social media.

The rest of the 2,200-square-foot space is just as colorful, painted with trees, flowers and leaves.

“The walls are 3D plastered and painted. The lightweight concrete floors are hand stamped with leaf shapes hand-cut from the cabinet boxes for my unit and then stained. They intend to represent trees, leaves and reflections in a pattern that suggests ornate carpet,” said Seymour.

The dining room has a giant sunflower with green, blue, red and yellow-painted floors. The office has trees on the wall and a blue cloudy sky ceiling mural.

One of the two bedrooms has an ocean-themed mural with fish and plants, while the other has boldly colored stripes and fruit painted on the ceiling.

There are two-and-a-half bathrooms, one of which has a second, more modest Adam mural with a sunflower covering, photos show.

The artist, Jeff Seymour, is an artist and developer. He developed the building in 2008 as an artist collective, but this, his personal condo, is one of the only units with his murals.

It became a local art crawl destination, according to Waukesha art crawl pamphlets.

“I built these condos in 2008 to help anchor artists/entrepreneurs… Ownership allows these artists to share in the successes they create by getting involved in the positive change they often incite,” said Seymour.

It seems the seller is betting his murals add value to the condo, which is asking $183 per square foot. In the nine-unit building, two other condos have sold in the past two years, going for between $129 and $177 per square foot.

“Rare to find a home and office as entertaining to look at and experience as it is a great place to entertain,” says the listing, which describes the home as “if Van Gogh and Dr. Seuss had a treehouse.”

The first floor is a commercial space, which can be used as an office, store or studio. It has two decks, a one-car garage, an outdoor parking space. The exterior has red brick walls with green and red tiles.

“My interior design strives to counter the building density and hard surfaces of Downtown living which I really enjoy,” Jeff told Jam Press.

Jeff Scrima with Tenderland Real Estate LLC has the listing.

Why We Are Entering The Best Real Estate Market Opportunity Since 2008
The 2023 Recession Just Got…Cancelled?
Son of Cellino & Barnes lawyer graces new billboard campaign
The Flip vs. Buy-And-Hold Strategy with Andre Beraud
This Home is FALLING APART! | Flip or Flop | HGTV