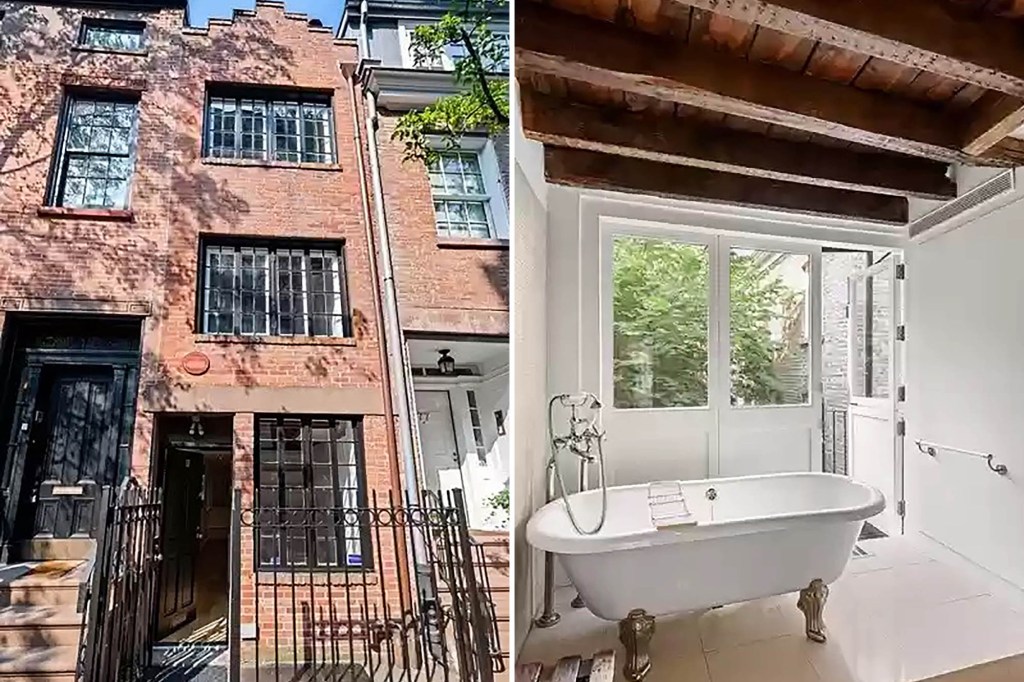 Skinny jeans may be passé, but skinny homes are still hot enough to list for millions of dollars.

A new video goes inside a $4.9 million Greenwich Village townhouse that is often called the narrowest home in New York City.

The TikTok post by StreetEasy has already racked up more than 31,000 likes, and it’s easy to see why: The skinny brick house is 9 feet, 6 inches wide — about half the length of a standard 18-foot parking space.

With three floors and 30 feet in depth, the home spans 999 square feet, packing in three bedrooms, two bathrooms, a finished basement, four wood-burning fireplaces and two balconies, according to Realtor.com.

Plus, French doors open to a back patio and a tree-shaded courtyard, according to the listing.

“When you look at the house from the street, it is very narrow, which is what it is most famous for. But there is a secret courtyard area with a garden, and that is actually my favorite part,” listing broker Hanna Oh of Williamsburg’s Nest Seekers International told The Post.

Why so narrow? The half-address at 75½ Bedford St. was never designed as a residential lot. In 1841, it was an alleyway to a brewery, according to the NYC Landmarks Preservation Commission.

The alleyway closed in 1873 when Horatio Gomez — trustee of the Hettie Hendricks-Gomez Estate, which owned the surrounding land — squished the tiny house between its two neighbors, Preservation Commission records show.

Notably, poet Edna St. Vincent Millay lived at the tiny house for two years beginning in 1923 — the year she became the first woman to win the Pulitzer Prize in poetry for her “The Ballad of the Harp-Weaver: A Few Figs From Thistles.” (However, she didn’t write the poem at the house, as is often claimed.)

The house underwent several renovations during Millay’s stay, with a new “certificate of residence” issued in 1924. While it’s unclear exactly what she added, features dating to the ’20s include a skylight on the top floor and oversized wood casement windows, according to the Landmark Preservation Commission.

Plus, a Dutch stepped-gable roof was added to the brick facade in the ’20s, a fact that draws possible connections to Millay’s Dutch husband, Eugen Jan Boissevain, a coffee importer from the Netherlands.

But despite her Pulitzer success and probable renovations, the couple wanted more space than the 9-foot-6 townhouse could provide. They lived in the building only two years before spending $9,000 on a 435-acre berry farm in Austerlitz, New York, according to a Vassar University report.

After her famed residence, the original “Shrek!” cartoonist William Steig, his wife and his wife’s sister — famed anthropologist Margaret Mead — lived in the house in the 1930s. And “Stone Soup” children’s book author Ann McGovern occupied the house in the ’80s according to a “The Villager” report from 2004.

The home with exposed ceiling beams and white oak floors last sold for $3.25 million in 2013, The Post reported at the time.

There may be narrower buildings in the city, but the address is the narrowest known fully residential standalone house, according to a thorough review of property records.

The video that gives a rare peek inside New York’s “skinny house” on TikTok is part of StreetEasy’s outreach effort during the coronavirus pandemic to reach younger buyers, many of whom potentially use TikTok, said a StreetEasy representative. The account, founded in March 2020, now has 350,000 followers.

“When New Yorkers weren’t able to safely view apartments in person, offerings like virtual tours on StreetEasy and social media platforms like TikTok filled that need, allowing them to get a real sense of the apartment before stepping foot inside,” StreetEasy Senior Brand Marketing Specialist Jeryl Lippe told The Post.