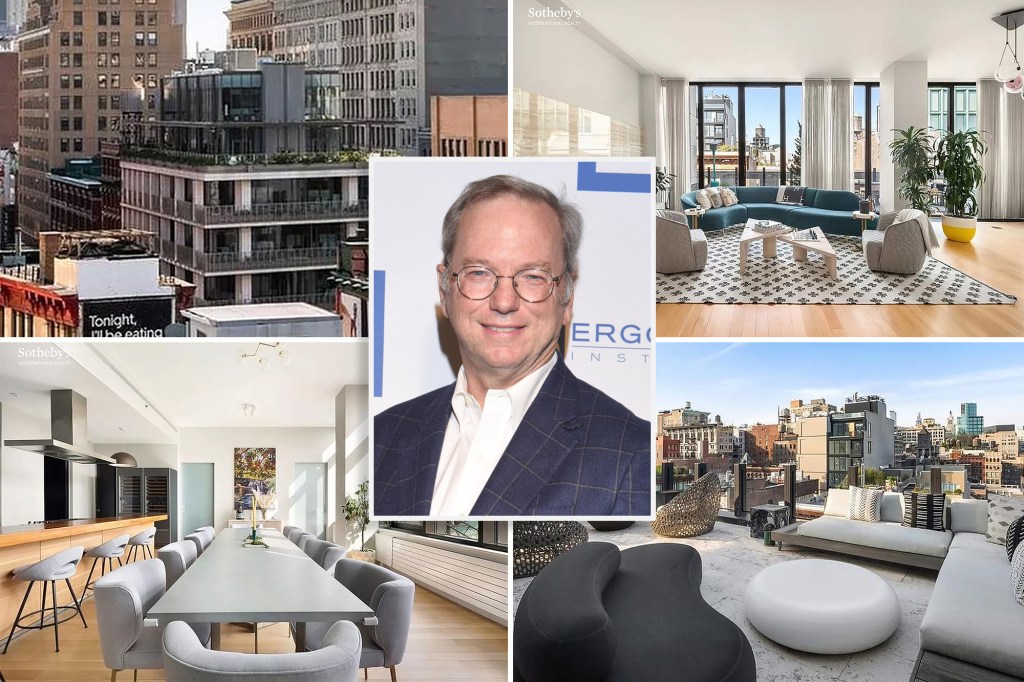 Former Google CEO Eric Schmidt is the buyer of a $27.5 million condo in Noho, The Post has exclusively learned.

Elsewhere in the luxe duplex, a siding wall of windows opens onto another 550-square-foot terrace.

The main bedroom suite has its own fireplace as well as a custom-fitted dressing room and a “spa bathroom” with a soaking tub.

There is also a spacious private office with another fireplace, plus a guest suite. The kitchen is complete with a built-in espresso machine, a walk-in pantry and a 20-foot-long wood breakfast counter.

Sources said that Schmidt has purchased the four-bedroom pad as an investment property. According to a listing, it’s still in contract.

The penthouse apartment was previously owned by Goldman Sachs vet and Bitcoin bigwig Michael D. Daffey, who put the deal together to construct the building in 2005. The property once played home to Will Smith as a renter.

Schmidt — who’s worth about $20 billion, according to Forbes — is on a bit of a bicoastal real estate buying spree.

He reportedly purchased a historic Los Angeles manor — known as the “Jay Paley Residence” — earlier this year for $61.5 million from the estate of late hotel heir William Barron Hilton.

Last year, he reportedly acquired an 11-acre estate in Montecito, Calif., for $30.8 million. The 22,000-square-foot home was once the Center for the Study of Democratic Institutions — a think tank with attendees that included John F. Kennedy, Martin Luther King Jr. and Henry Kissinger.

The tech tycoon also reportedly owned another $22 million Holmby Hills home — which once belonged to the widow of Hollywood actor Gregory Peck — plus another $20 million Montecito compound that he purchased from talk show host (and renowned luxury real estate flipper) Ellen DeGeneres in 2007.

Schmidt was chief executive of Google from 2001 to 2011 before becoming the executive chairman of Google’s parent company, Alphabet. He stepped down from Alphabet’s board in 2019.

Page Six reported last month that the billionaire, 66, has been dating 27-year-old tech entrepreneur and law school grad Michelle Ritter. He’s still married to his wife of 40-plus years, Wendy, with whom he reportedly has an open relationship.

The Flip vs. Buy-And-Hold Strategy with Andre Beraud
Flip house update – replaced the siding, back patio and roof #fliphouse #homerenovation
Luxury developers in Los Angeles bet someone will pay record prices for these condos
This Home is FALLING APART! | Flip or Flop | HGTV
This is getting really SCARY! | Redacted with Natali and Clayton Morris