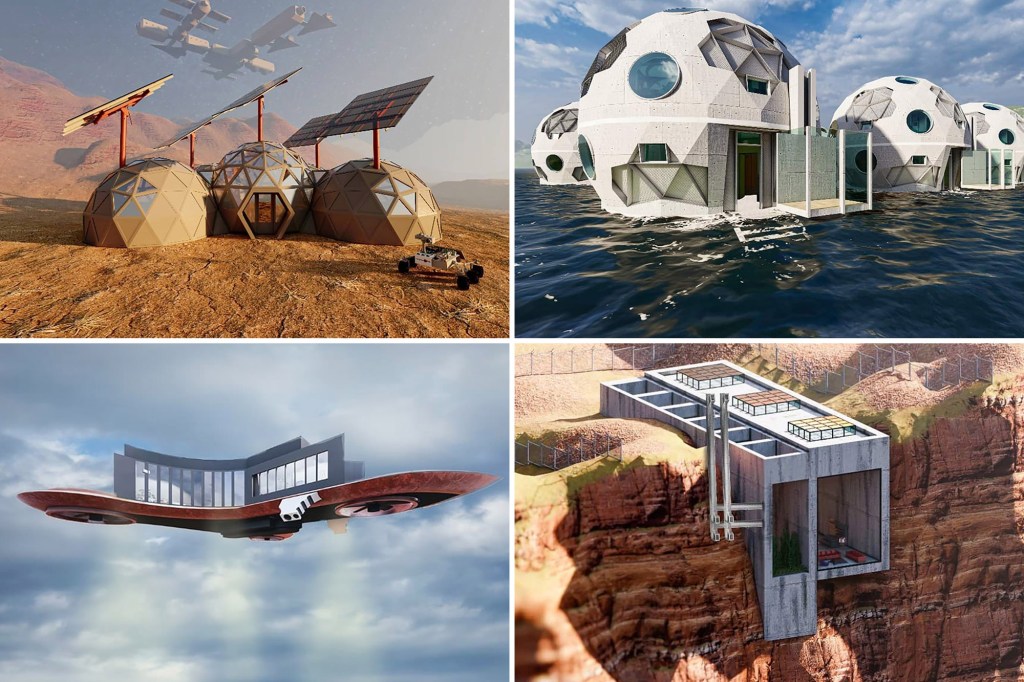 The future awaits, and many have wondered what our planet will look like in the years to come.

Architect Chris Lawson might have the answer, at least when it comes to residences. For every environment, CK Architectural envisions the types of futuristic homes we could live in years down the road.

Specifically, Lawson lays out the floor plan for four different types of conditions: life on Mars, a life underwater, a life up in the clouds and — gulp — an underground post-apocalyptic future.

With the help of real estate development company GoodMove and a 3D designer, sketches of the homes created by Lawson have been brought to life.

Each home is built and designed with materials and shapes to withstand the elements of its environment.

Scroll through the get an inside look into the future.

Although the Red Planet is outside of our grasp at the moment, game-changers like Elon Musk and his company, SpaceX, are making this idea a real possibility for humanity. With the help of NASA, which is planning its first manned mission to Mars by 2030, this home can be turned from science fiction to a science fact real quick.

The home design would be part visible and part underground — providing structural support and protection from the harsh climate outside. It also would protect from too much light.

With power and survival being at the forefront of the design, Lawson explained to GoodMove how bubble-like domes would permit easier layering from the upper and lower level. Farming for crops can take place within these domes and solar panels installed outside the domes would promote self-reliant energy.

The material would be made with either titanium, heavy-duty plastic or glass to be able to bear the weight of the structure and make the dome functional, according to GoodMove.

While we are still awaiting flying cars, it’s not completely out of the realm to expect that flying homes would shortly follow, given the myriad of technological advances taking place today, Lawson said.

With epic sky views, these homes are surely to be an Instagram influencer’s dream. Who needs a penthouse in the sky, when you can actually live there?

According to GoodMove, the overall shape would most likely resemble the drones we see today, only ten times bigger with gigantic propellers that would continuously spin to create the airflow need to keep this flying home in the air.

The build would need to be carefully placed – ensuring that there is equal weight distribution so the house can maintain its balance up in the air. Probably important.

Plenty of windows would be installed throughout the home to ensure beautiful sunset views, but UV shielding would be necessary, to avoid damage from the sun’s rays (as close as you’d be to them).

Should we ever find ourselves living in an apocalypse, homes might need to be a bit sturdier.

And Lawson and GoodMove have dreamed up a much nicer version of what these houses could look like than the post-apocalyptic futures of movies like “The Matrix.”

The home would have to be built underground to provide optimal safety, so any opportunity to let light in is crucial. Hatch-like windows to surface domes or windows built in hillsides are options. And because fresh air is vital, future designers would consider some sort of external vent or tube to filter the air in.

Mirrors would also be used to let light in, farm and grow crops for food.

It’s not exactly Little Mermaid levels of living underwater, but these pods would be an ideal solution for aquatic living.

Given that around 71% of Earth is covered by water, it wouldn’t be much of a surprise if we have to adapt to living away from land at some point.

Resembling the Mars home, domes would be the ideal structure for easy flotation. Materials would likely be made up of glass or plastic to hold up against the water.

With some of the structure sitting beneath the waves, lift access would also be required so people could get back to the surface, according to GoodMove.