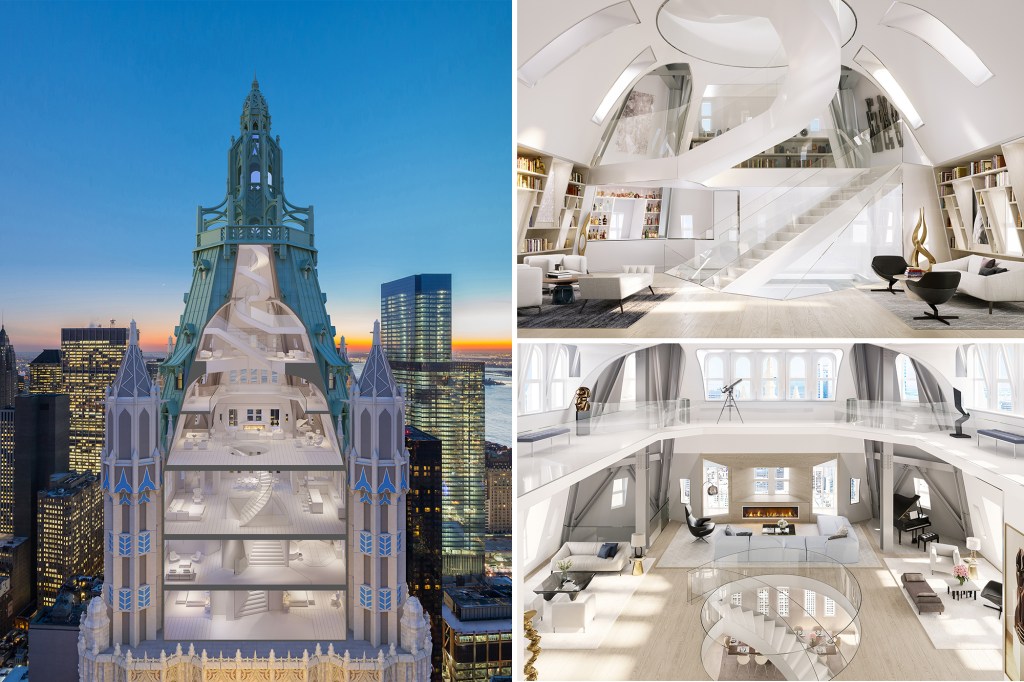 Sitting on top of the world indeed!

The Woolworth Pinnacle Penthouse awaits a buyer with vision and $79 million.

The five-floor spire located 727 feet in the sky is at the top of the Woolworth building, which was the tallest building in the world when it was built in 1913, according to the developer’s website.

But designer Thierry W Despont — who worked on the Statue of Liberty, the Ritz Hotel Paris, and 220 Central Park South — has a vision for the cylindrical peak: to transform it into a ritzy penthouse.

“We figured out how to make an amazing castle in the sky,” Kenneth Horn, developer of the Woolworth Tower Residences and founder of Alchemy Properties, told The Post.

Optimizing its a 400-square-foot observatory terrace, the development team prepared the space by adding 125 windows, 24-foot ceilings and a private elevator, according to the listing.

“When we bought the building, the Pinnacle was a great space. It was always used as an observatory deck, but because it didn’t have sufficient windows in its current state, it couldn’t be used as a residential space,” Horn told The Post.

The buyer can customize the penthouse’s finishes, and an alternate design (which would require buying an additional floor) by the Skyhouse Penthouse and 150 Nassau Street designer David Hotson is also available.

“Initially, we were considering renovating the space and building it out, but we realized that anyone who is going to buy this is going to want to exert their own influence on the space,” Horn told The Post.

The 32-condo building offers a lounge, a pool, a gym, a wine cellar, a tasting room, a bike room and a resident-only lobby. The first 28 floors are office and commercial space, according to the website.

The Woolworth building was commissioned by five-and-dime retailer F.W. Woolworth and built by architect Cass Gilbert in 1913.

The 792-foot building would remain the tallest building in the world until 1930 when 40 Wall Street, the Chrysler building and the Empire State beat it by 5 feet, 254 feet and 662 feet, respectively.