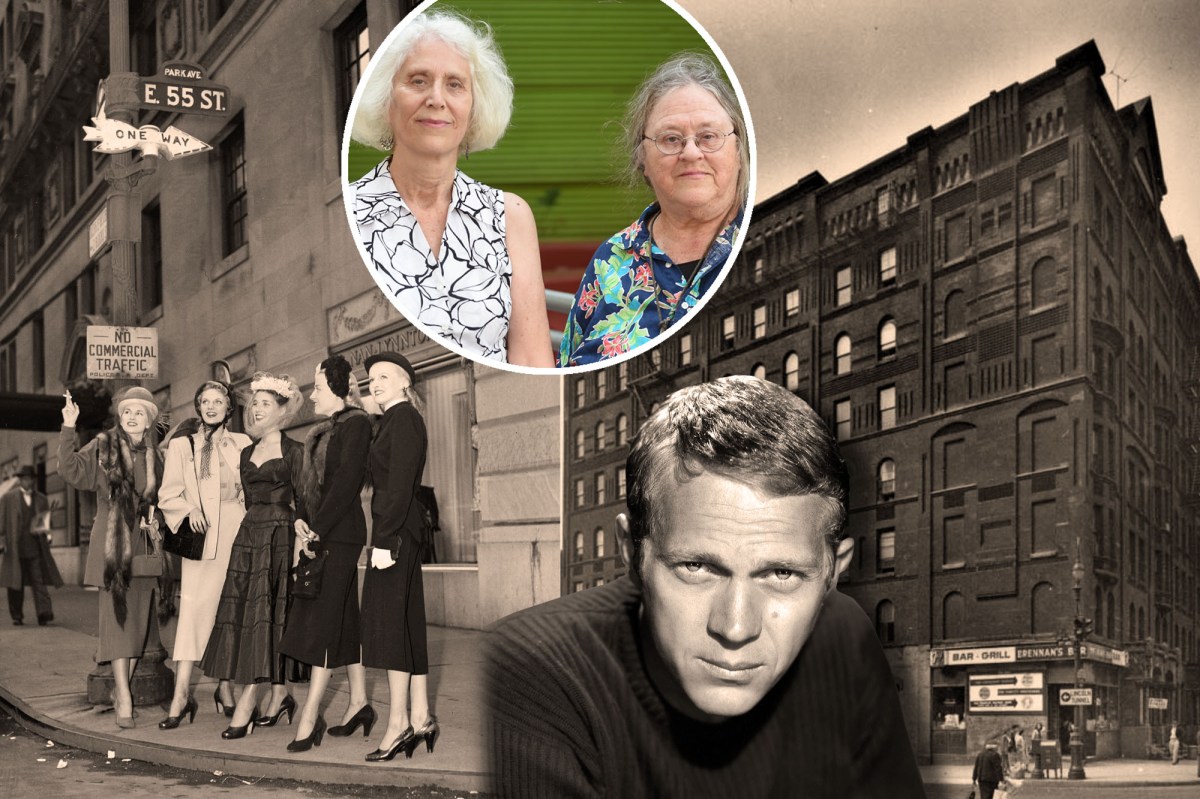 The Windermere building, which was home to a new breed of pioneering “bachelor girls” in the early 1900s, may finally rise again after decades of disrepair and neglect — thanks to some women who’ve fought for 40 years to save it.

“Someone I know drove by it the other day and told me, ‘Hey, there’s a new building up where the Windermere was,’” said former Legal Services attorney Deborah Rand, who began helping tenants fight evictions in 1980. “I said, ‘No that’s still the Windermere. It’s finally been fixed up.’ He didn’t even recognize it.”

The  Queen Anne-style Windermere, one of the oldest large apartment houses in the city, dominates the southwest corner of 57th Street and Ninth Avenue in Hell’s Kitchen. One historian called it “an exuberant display of textured, corbelled, and polychromatic brickwork.”

For years, it was  a place where the first Carrie Bradshaws in Manhattan got not just a room, but an apartment of their own.

Women had been entering the workforce in record numbers in the late 1800s but single, independent females were stuck living in boarding houses or charity-run facilities, according to Michael D. Caratzas, a historian with the Landmarks Preservation Commission.

But at the turn of the century, the Windermere — helped along with its superintendent, a father to two daughters who were writers — offered something new.

Many of the women who lived there worked as salesgirls or secretaries, while others were in the arts, and all lived “unsupervised, with a latchkey and without a chaperone.” One, a writer, lived for awhile in a rooftop room.

A 1898 article in The New York Times described the Windermere as “sacred to the New Woman.”

Decades later, though, the building became the site of epic landlord-tenant battles, and it had deteriorated into a house of horrors when the last tenants left in 2008.

Though the Windermere was declared a city landmark in 2005, it’s been vacant since 2007. It’s one of the only Manhattan apartment houses of its kind — especially one sitting on such a prime location — to fall into such lengthy disuse.

But it’s never lost its hold on some former tenants, as well as lawyers and activists, who fought for  it.

“It draws you in, people get obsessed with it,” Rand told the Post. “There’s a drama there every minute.”

She was working for City Council member Ruth Messinger in 1980 when she got a call from Rand saying some tenants at the Windermere had been illegally locked out. Brewer called the police.

“What a mess,” she recalled. “I first went in there in 1980 and it looked like a demilitarized zone.”

Brewer represented the Hell’s Kitchen area from 2002-2013 and worked to save the Windermere all that time. Last week she sent out a letter in support of the zoning permit needed for the new vision for the Windermere, which would reimagine it as a boutique hotel with retail and restaurant space.

“[The building’s] been through so much. It has such a spirit from those first women who lived there back when it was built,” Brewer said. “I can’t wait to see it reborn.”

When it opened, the structure contained 39 apartments, each with five or six bedrooms complete with engraved marble fireplaces and mirrored parlor walls, according to a report from 2002. Amenities included liveried servants, hydraulic elevators and a telephone service.

When the area lost its luster after the turn of the century, the bachelor girls moved out and a grittier, artsier crowd moved in. Actors Steve McQueen and “Live and Let Die” villain Yaphet Kotto lived there in the 1960s. Part of the Windermere became a dingy SRO.

“We were a real mix of people,” Haskin, a former computer programmer, told The Post. “There was a Romanian violinist in a beret, there was a Puerto Rican woman, there was a seamstress from Chile. It was a bit of a rough area then. We called it ‘Port Authority North.’ But we were all good people who paid our rent.”

The building took a sharp downward spiral in 1980, almost exactly a century after it opened.

Rand first met residents, most of whom lived in the SRO part of the building, when they came to her in desperation that year. She handled at least 100 of their cases, helping to get many eviction cases tossed out.

Then-owner Alan B. Weissman was trying to get rid of tenants so he could sell the place, and the Windermere became the site of some of the worst landlord-tenant harassment in the city’s history.

There were assaults and death threats, and one tenant’s apartment was broken into four times. Once, according to the 1983 indictments,  “cleaning fluids were poured over his books, clothing and bed.”

“Weissman started to send people into the building to threaten people,” Rand told The Post. “It got violent. They knocked on doors and went inside. They moved pimps and prostitutes and drug dealers in. It was terrifying. A lot of the people were vulnerable and elderly. They’d tell them that if they didn’t move out, they’d be in danger, that something bad was going to happen to them.”

The managing agents and superintendent went to jail after being charged with conspiracy to force tenants to move, as well as burglary, coercion and attempted grand larceny.

Haskin was part of a group ordered by the city to leave in 1983.

“We were forced out … as the building was deemed in danger of imminent collapse,” Haskin said. “We were given one week to pack — daytime only — and couldn’t sleep there. At the end of the week, on an evening, police cars were at the building with flashing lights and barricades. It was awful.”

She and some former neighbors then spent a decade fighting to return before giving up.

“You can never forget it,” Haskin said of the Windermere. “It’s stayed in my heart. I was naive at the time. I thought that since we were good tenants, it would all work out but I was wrong. None of that made any difference. We had to leave and it was more traumatic than I realized at the time.”

In 1986, the building was sold to an eccentric Japanese businessman who reportedly saw the Windermere from a tour bus and bought it without stepping foot inside. The landlord allowed the building to fall apart in an apparent bid to clear out tenants.

The once-grand building turned into a pigeon excrement-dotted dump covered in netting and scaffolding. After 1996, just a handful of tenants remained, living without electricity. They gathered drinking water from the sidewalk hydrant.

Even after leaving Legal Services in 1987 to work as an attorney for the city, Rand continued to advocate for Windermere tenants for the next three decades.

With a push from former Windermere tenants, the building was designated a landmark in 2005, thus foiling any plans to demolish it.

In 2007, the city ordered the last remaining tenants, all of whom who had been there for about 40 years, to vacate because the building had become a fire hazard.

But before the tenants could move back in, the owner decided to sell. As as a condition of the sale, the tenants got $500,000 each to give up the right to return to the Windermere.

The city, meanwhile, netted $1 million in fine money for all the violation of the landmark preservation laws.

“It was bittersweet,” Rand said. “I started by trying to keep all the tenants in the building and that had always been my wish.”

FEW people have seen the current state of the Windermere’s interior. Among them is Moshe “Mark” Tress of Lakewood, NJ, who bought the place for $13 million from the absentee Japanese owner in 2009.

“It was a mess when I got it,” Tress told The Post. “There was no running water and it was a hazard inside and out. It felt like walking through a combination of a haunted house and a fun house.”

Tress has restored the exterior to its former grandeur with a multi-million dollar facelift of the rich red-brick facade. Three ornamental pillars of special granite were transported from Scotland to match the original decoration.

“It’s a big, rich part of New York City yesteryear,” Tress said. “It’s a gem in the rough and it’s back.”

The plan is to turn the Windermere into a 175-room boutique hotel with retail on the first floor. Tress expects to get a permit to add one story that will allow for a rooftop restaurant.

Tress “got an incredible deal,” said someone familiar with the situation. The building will probably be worth between $100 and $150 million when fully renovated.

Brewer is supporting the application, now in the process of a uniform land use review process,

No matter what, the new incarnation of the Windermere will include 20 units of affordable housing — required by the Landmarks Preservation Commission to compensate for the past tenant harassment.

“It made me feel good that we saw it through,” Haskin said. “The building survived. It was a fight not in vain. It’s pretty awful not to have a home. But something good came out of all that suffering.”