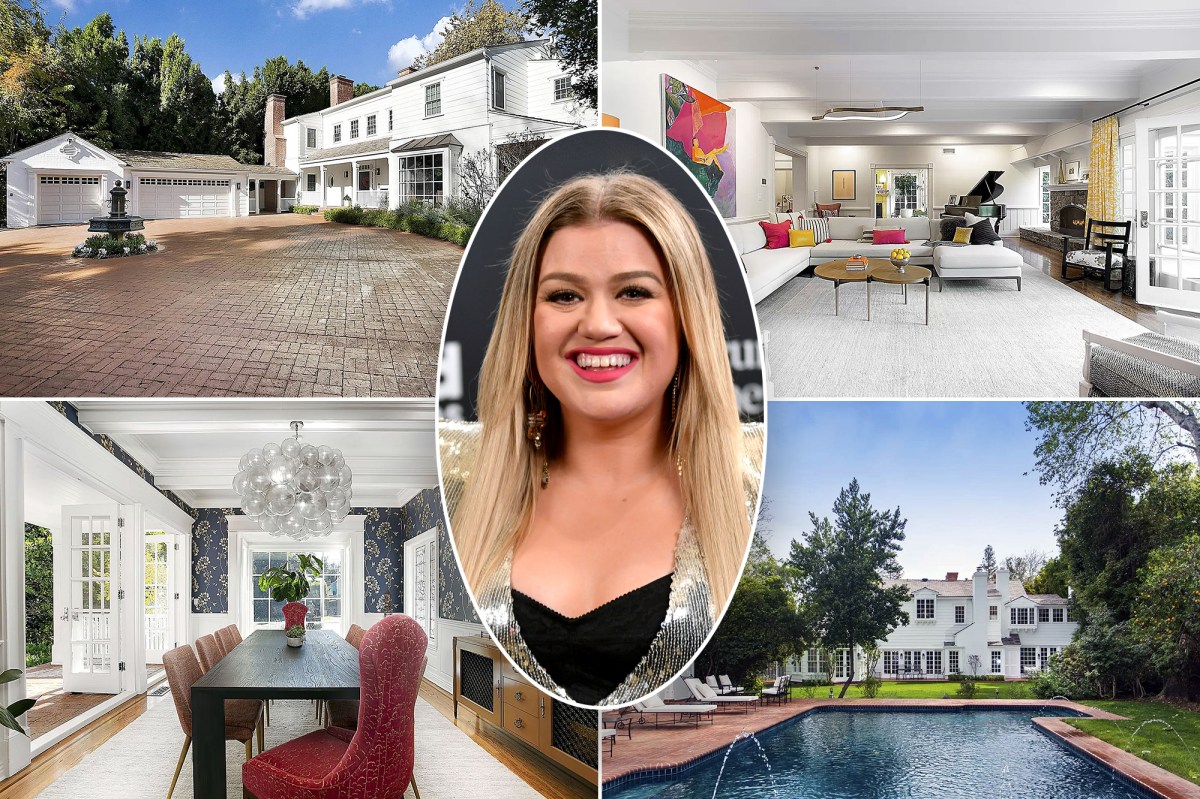 Kelly Clarkson has installed a new playground in her the $5.5 million Toluca Lake mansion she purchased last month, exclusive photos obtained by The Post show.

Inflatable pool toys, bicycles, a trampoline and various toys litter the backyard. The playground is decked out with a slide, swings and a playhouse, photos show.

The “Stronger” singer and her kids are settling in after the court awarded her primary custody of 7-year-old River Rose and 5-year-old Remington Alexander, whom she shares with her estranged husband Brandon Blackstock, Page Six previously reported. Montana resident Blackstock has visitation rights at Clarkson’s house, and they will also visit him on certain holidays.

The “Since U Been Gone” singer bought the mansion for $5.445 million after finally selling her Hendersonville, Tennessee, mansion for $6.3 million after four years on the market. The location northwest of Los Angeles will allow her to continue shooting “The Kelly Clarkson Show,” which is slated to replace “The Ellen Show’s daytime television slot.

The purchase comes a year after Clarkson, a coach on NBC’s “The Voice,” filed for divorce after seven years of marriage.

Upon approaching the gated estate, guests can park in the motor court or in the three-car garage before stepping up to the red brick patio, which teases visitors with leaded glass windows peeking inside the dining room.

Inside the black-painted door with transom windows is an entry with hardwood floors and a natural color palette, listing photos show.

A half-bathroom is to the left of the entry, and a formal dining room, which has towering bay windows and French doors opening outside, is to the right.

To the left of the living room is a glass-paneled playroom with a yellow fireplace and wood floors. French doors open onto the patio. 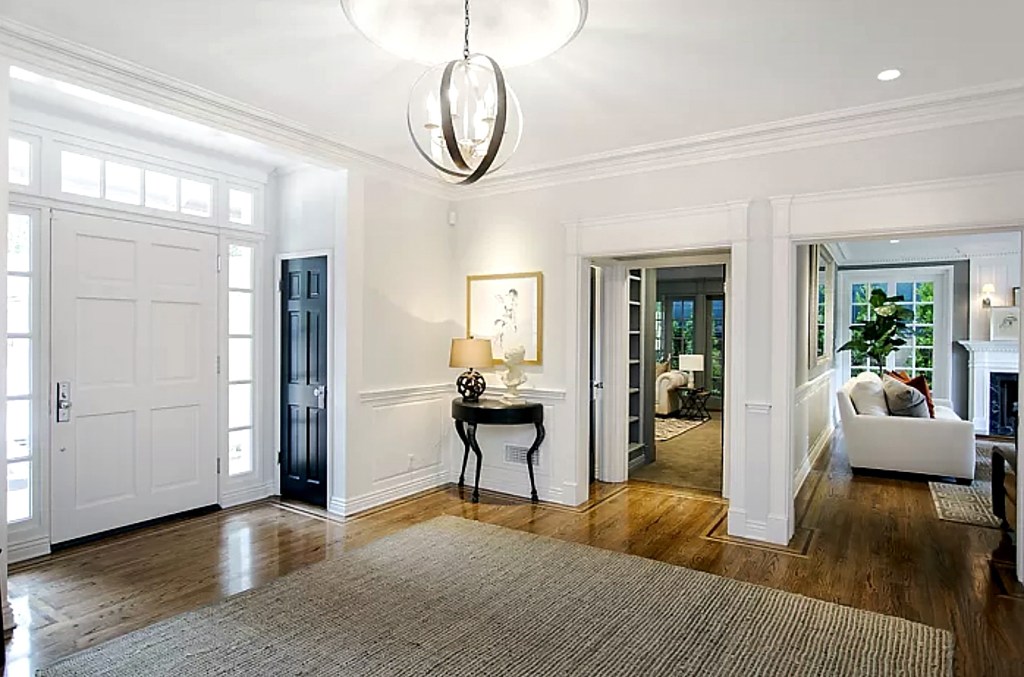 Inside the black-painted door with transom windows is an entry with hardwood floors and a natural color palette. 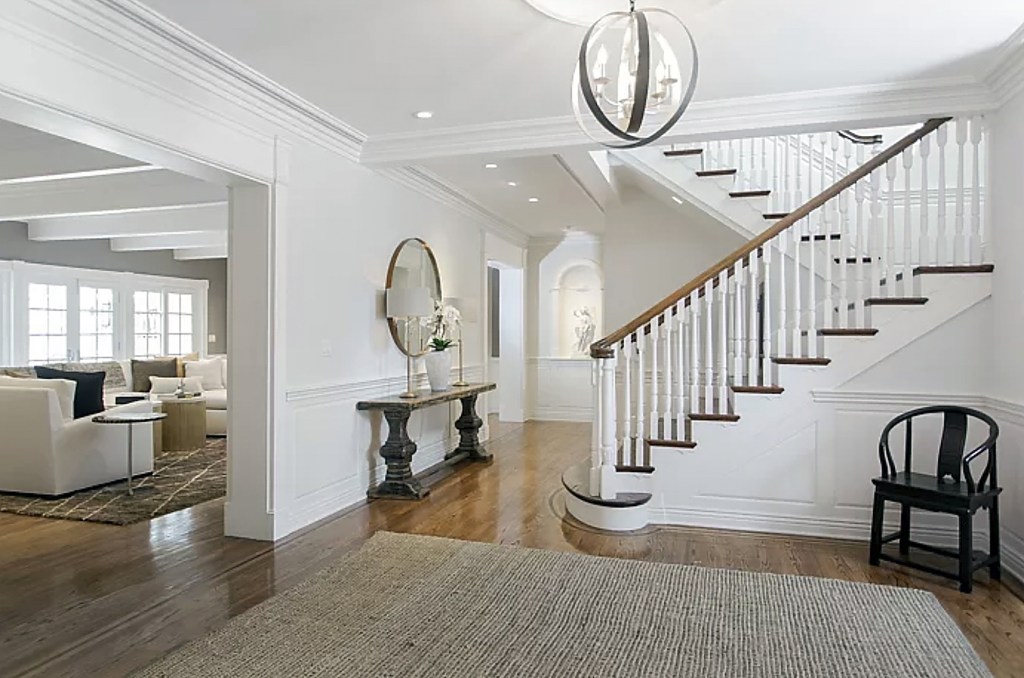 The stairs lead to the second floor with bedrooms.

A bright octagonal breakfast room sits off of the kitchen with large windows and a glass door that opens to the yard. The home also has a wine cellar that holds at least 1,200 bottles, a video of the property shows.

The 1-acre lot has a tennis court, a guest house, a motor court, a gunite pool and a courtyard patio, according to the listing. Photos show that the tennis court is being used as a basketball court.

“The Who’s Who of Hollywood have partied here,” reads the listing presented by John Michael Igar of Douglas Elliman, whose representative declined to comment on the sale.

And the “Who’s Who” certainly have shown up — from “Cheers” producers to Old Western actors, the home near the Bing Crosby’s historic Toluca Lake abode has hosted musicians and producers alike.

The home was built in 1936, making it one of the oldest in the area. The developer is unknown, but the property borders the Kling Street Residential Historic District, which was developed by the Heffron-McCray-St. John development group, according to the Los Angeles Historic Resources Inventory. 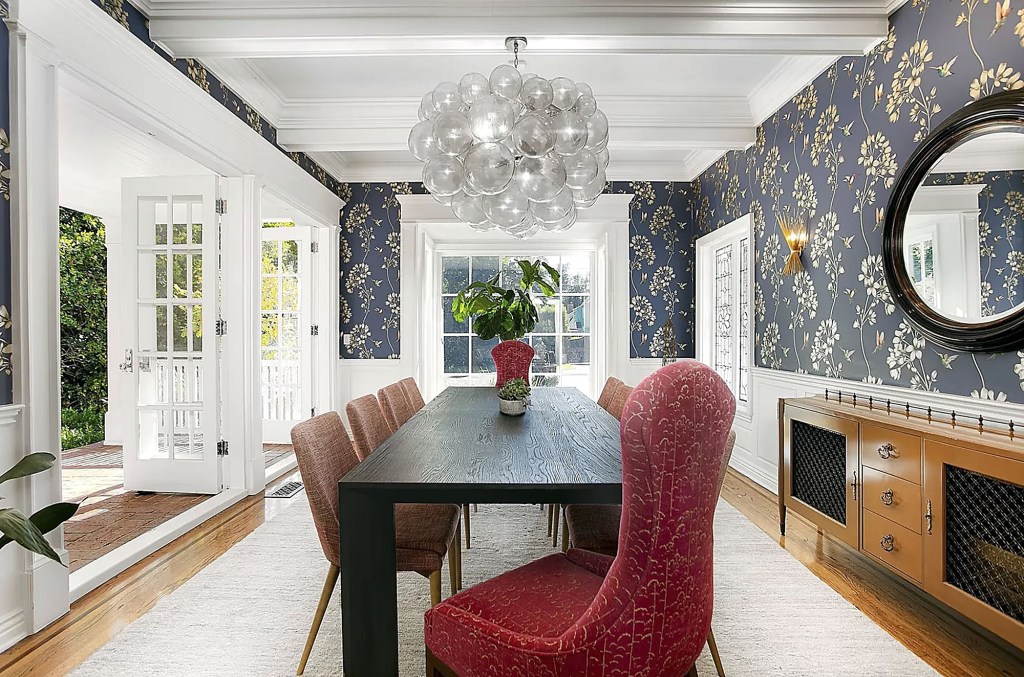 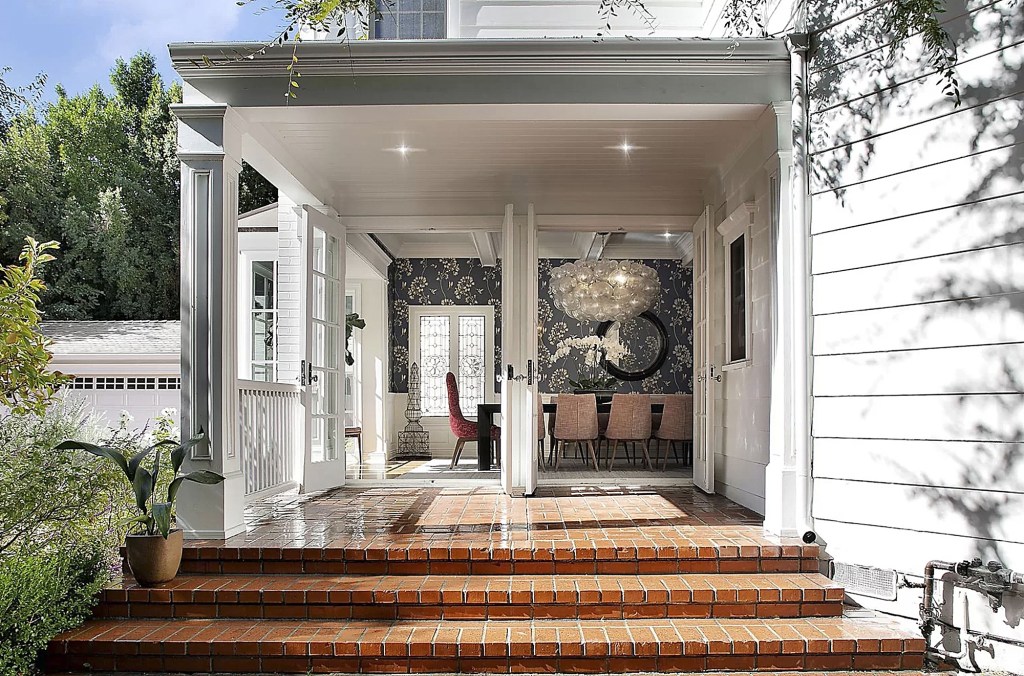 French doors in the dining room open outside.

While its earliest owners are unknown, it was home to Old Western movie actor Robert Fuller in 1972, “Route 66” star Dean Moray in 1989 and “Cheers” producers and writers Edward and Cheri Steinkellner in 1992, according to public records.

This century, Beach Boys and the Monkees concert producer Kevin Allyn and his wife, Robyn Allyn, owned the house by 2000 and appear to have unloaded it in 2017 or 2018, when the house sold to an anonymous LLC that renovated the property, according to public records. 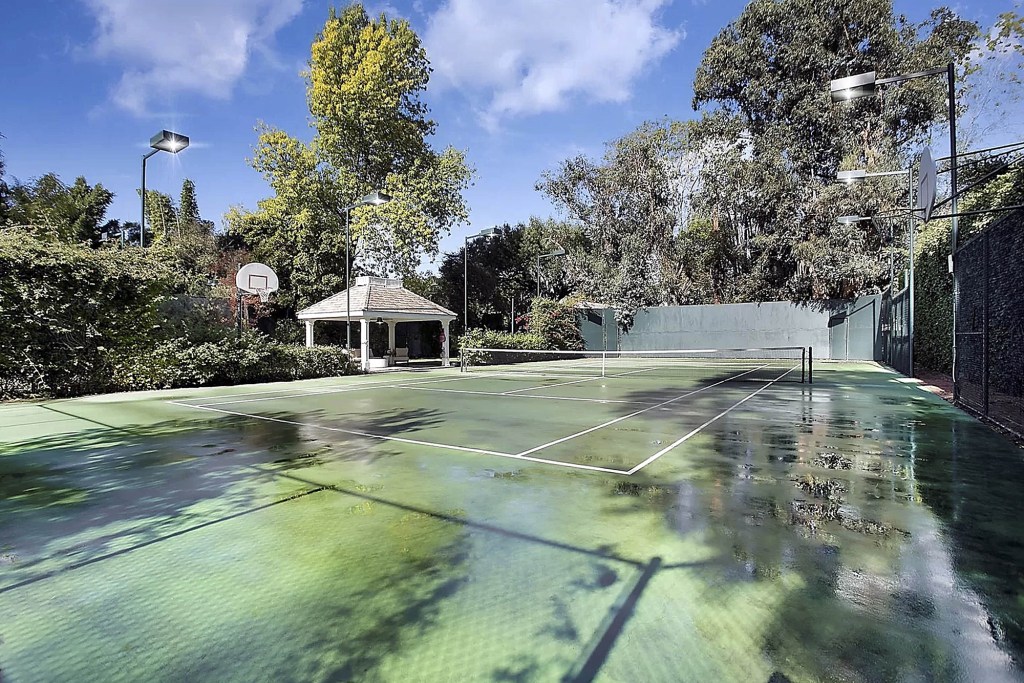 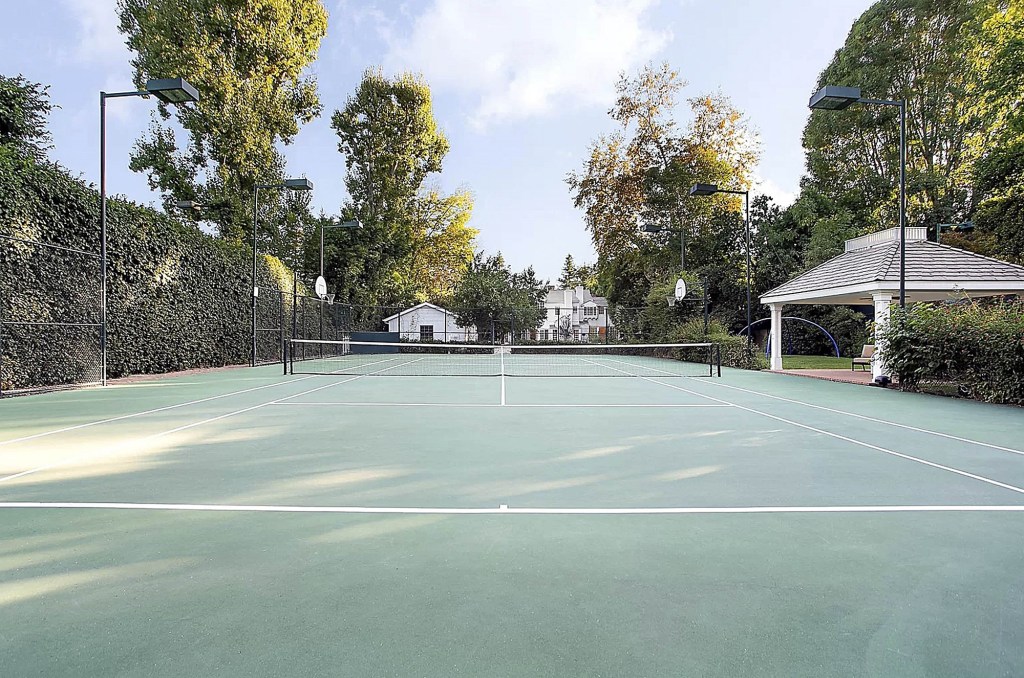 The tennis court is pictured from another angle.

The future of parking is in New York — and it costs at least $300,000 per space
FLORIDA Housing Market: Home Prices Drop to a 7 Month Low
Real Estate Investing Strategies | Adding Additional Units to Single Family Home
Grammy-winning ‘Fame’ and ‘Flashdance’ singer Irene Cara dead at 63
HUGE Changes are Coming to the US Housing Market