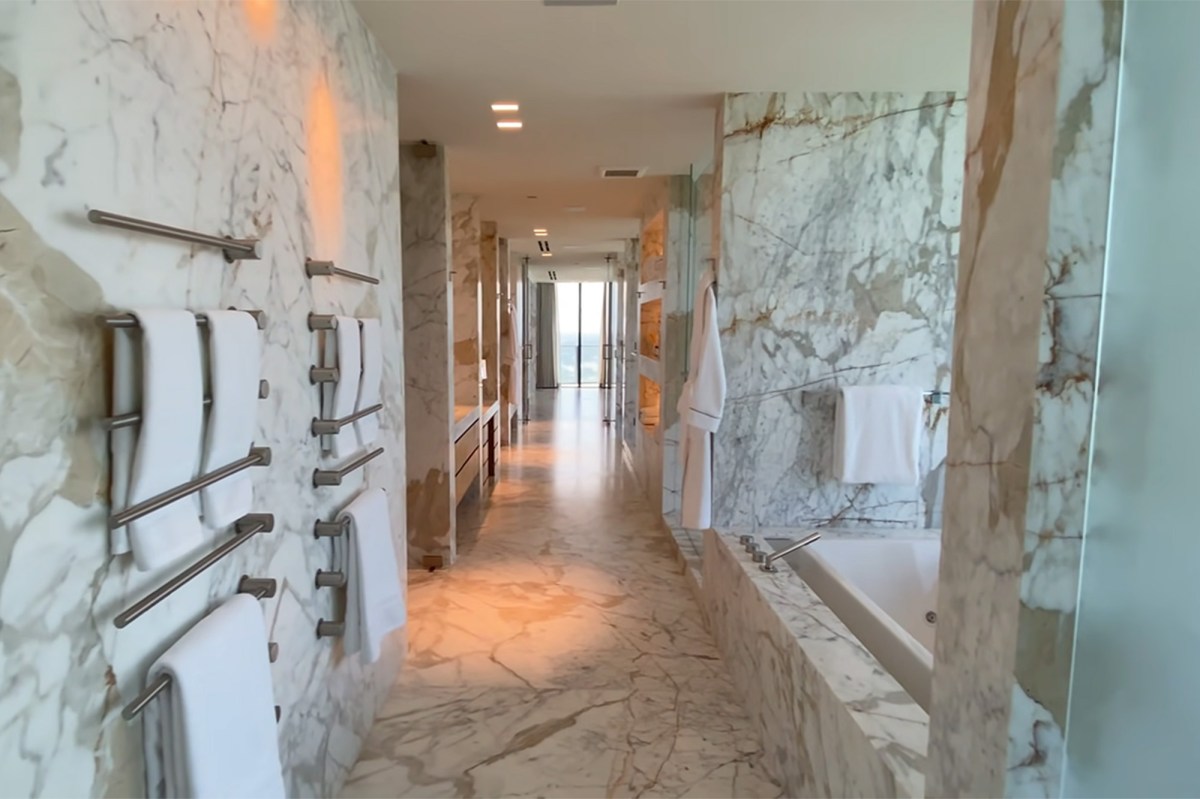 How much is your bathroom worth?

This Calacatta gold marble stone bathroom spans 1,500 square feet — larger than most American apartments. It stretches longer than a standard bowling alley at 65 feet long, according to the listing.

“When I say a million-dollar bathroom, I’m not talking fancy words. I mean if you were to estimate the price of this bathroom, it’s about a million dollars,” said YouTubing, TikToking luxury broker Jason Matouk, who garnered 120,000 likes on TikTok last week for just a walkthrough of the ultra-luxe bathroom.

From front to back, the Italian marble bathroom has a wet bar, a toilet and bidet room, a jetted tub, a walk-in closet and a frosted-glass walk-in rain shower with ocean and city views. Lit, recessed marble shelving sits across from a sink area and a separate vanity with a built-in lit mirror and a makeup sink, according to the video.

“The finishes on the flooring, the walls, the tub — the lengths they’ve gone to — I have never seen in a bathroom anywhere,” Matouk told The Post.

From there, separate amenities for a partner include another identical walk-in closet, walk-in shower, sink area and a separate room with a toilet and a bidet, the tour shows.

“I’d live in that bathroom,” reads a June 21 comment on the TikTok video.

At the end of the bathroom are a full steam room and a sauna with LED lights and speakers, according to the video.

“There is nothing about it that’s not insane,” Matouke told The Post.

Though he’s not the listing broker — that honor currently rests with Jeff Miller of ONE Sotheby’s International Realty — Matouk was among the first to see the bathroom in person, he said. He first posted a tour of the penthouse in November 2020.

The other $24.5 million isn’t bad either

“A mansion on South Beach is usually 6,000 to 10,000 square feet. To have a condo that size is shocking. More shocking are the terraces,” he said.

Other luxurious finishes include a movie theater, a lit onyx bar, two private elevators and a rooftop pool, according to the video tour.

First listed for $39 million in 2017, the three-level condominium hasn’t sold since it was developed in 2014, according to Miami-Dade property records. But brokers say it has courted A-list stars, and Lionel Messi recently bought another condominium in the building, The Post recently reported.

“The person who buys this penthouse either has to have billions or hundreds of millions of dollars,” said Matouk.

What is a ‘rolling recession’ and how does it affect consumers? Economic experts explain
Cheaper to rent than buy in most major U.S. cities
Why We Are Entering The Best Real Estate Market Opportunity Since 2008
Is Now a Good Time to Buy a Home in America? (Prices Are CRASHING)
‘Amityville Horror’ home sells for $1.46 million