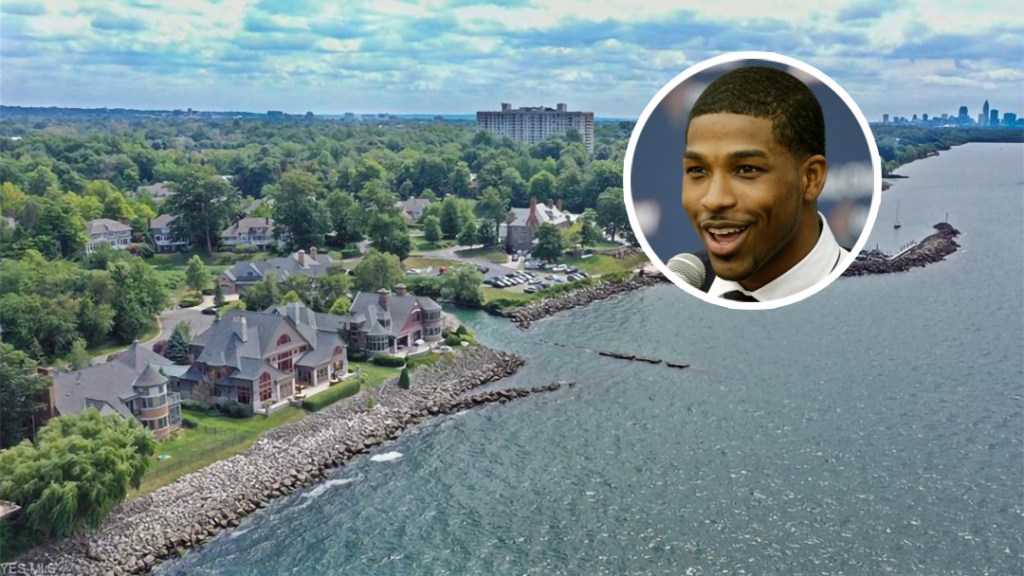 Though he spent nearly nine years with the NBA’s Cleveland Cavaliers, Tristan Thompson officially plays for the Boston Celtics as of November. So, what’s a baller on the move to do? Sell the old Ohio stomping grounds, of course, as Realtor.com reported.

Thompson bought his Lake Erie home way back in 2015 for $1.9 million, a great deal below the current $3.25 million ask. Sited in a particularly ritzy part of town, within an exclusive gated community, the residence weighs in at a mansion-sized 6,242 square feet with five bedrooms and seven baths.

The exterior of Thompson’s former digs is clad in rectangular beige and gray stone and topped with a gray shingled roof. Inside, the home boasts an open floor plan, honey-colored hardwood floors, the occasional gray accent wall, and recessed lighting.

A sprawling great room contains the living room, dining area and kitchen. The entire space is bathed in natural light, thanks to a series of floor-to-ceiling windows that also serve up stunning views of the lake. The living room area is visually anchored by a large fireplace framed by calacatta quartz, which no doubt comes in handy during chilly northern U.S. winters. A sliding glass door provides access to the patio area.

In keeping with the breezy open floorplan, the gourmet kitchen itself is totally open, so hosts can entertain their guests and cook at the same time, à la Julia Child. And any chef will be impressed by the large island with its farmhouse-style sink, white quartz countertops, calcatta quartz backsplash, state-of-the-art stainless appliances and an industrial-sized refrigerator for storing pregame (and afterparty) snacks. And for the avid boozer, the home also boasts a massive wet bar — with an aquarium, no less — plus a temperature controlled wine room.

The spacious master suite has a small sitting area, big-picture windows with lake views and a private balcony. The spa-like master bathroom includes a large soaking tub, dual sinks and a free-standing steam shower with a snazzy black-and-white tiled accent wall. For any visitors, there are three guest rooms, plus an in-law suite complete with a kitchenette for extended stays.

The listing is held by Linda Musarra at Chestnut Hill Realty.

This Ohio mansion isn’t the only piece of real estate Thompson would like to offload — he’s also trying to sell a sprawling Los Angeles home for $8.5 million. In the offseason, he and girlfriend Khloe Kardashian currently reside in a $10+ million Hidden Hills, Calif. estate.

Has the Housing Market “Bottomed Out”?
Why U.S. Real Estate Is So Flawed | CNBC Marathon
Rent prices have dropped the most in these 5 U.S. metros. Why it’s cheaper to rent than buy in many markets
Hong Kong services to rebound as China reopens, but UBP says sector is coming from ‘fragile situation’
4 Ways to Invest in Real Estate with NO MONEY in 2023