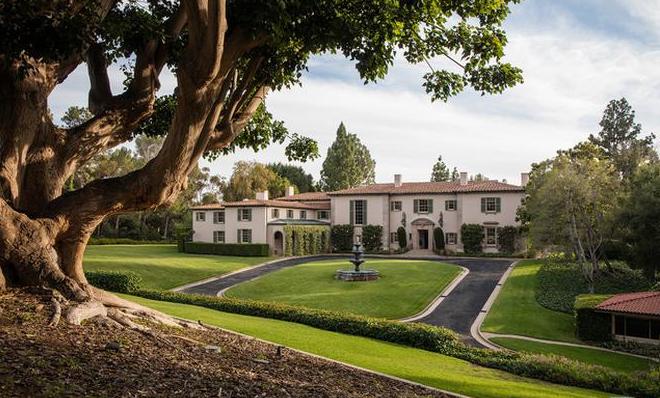 The final days of 2020 were kind to the highly publicized Los Angeles estate known as Owlwood, which quietly found itself a new owner. The 10-acre, three-parcel Sunset Boulevard property sold to an unidentifiable billionaire in three separate but concurrent transactions that totaled exactly $88 million, according to public records. (Grant deeds name only a mystery Chicago-area LLC, Calch Urban Investments, as the buyer.)

Though the deal closed off-market, the Holmby Hills compound had been widely marketed by luxury realtors Tomer Fridman, Sally Forster Jones, Drew Fenton, and Tyrone McKillen since summer 2019, with a $115 million asking price. Mostly vacant for years, the place last sold in 2016 for $90 million to Woodbridge Investments, the now-defunct Ponzi scheme that was busted up by the SEC in 2017, ultimately landing its founder in prison. The lavish estate was sold as part of Woodbridge’s still-ongoing bankruptcy proceedings.

The massive compound, accessed via its own privately gated street off of Sunset, consists of three separate but contiguous lots. The main property was originally developed in the mid-1930s by Florence Letts Quinn, the wealthy widow of real estate magnate Arthur Letts, who commissioned noted architect Robert D. Farquhar to build her an Italian villa-style mansion of roughly 12,000 square feet on an approximately four-acre parcel that today fronts the chi-chi Los Angeles Country Club.

Quinn died in 1944, and the mansion subsequently passed to a series of tycoons, including hotel magnate Joseph Drown and Joseph Schenk, the founder of 20th Century Fox. Schenk famously housed one of his paramours, a then still-mostly-unknown Marilyn Monroe, in Owlwood’s guesthouse for a brief time.

Eventually, Superior Oil baron William Keck bought Owlwood from Schenk and flipped it to “Some Like It Hot” actor Tony Curtis in the mid-60s. Curtis resold the place in ’74 to Sonny and Cher, who promptly divorced — Sonny moved out and Cher sold the place at a loss to carpet lord Ralph Mishkin.

Perhaps fittingly, Owlwood’s most longterm owner to date was shady Monaco businessman Ghazi Aita, reportedly an arms dealer, who bought the place in the late ’70s and held onto it until 2002. During his 20+ year ownership, Aita acquired the 4.6-acre lot next door, outfitting it with a swimming pool complex and guest quarters, and Owlwood became infamous for its elaborate parties frequented by youthful models and aspiring actresses.

In 2002, the house again sold, this time for about $33 million, to subprime mortgage kingpin Roland Arnall and his wife Dawn. The couple subsequently added Owlwood’s third and final parcel into the mix, buying out the gaudy pink mansion next door, which was most famously owned by Jayne Mansfield and included a heart-shaped swimming pool on the premises.

Mansfield fans nearly broke out the pitchforks and torches when the Arnalls quickly razed the legendarily buxom actress’s pink palace, reportedly without permits, replacing it with little more than an ugly blacktopped motorcourt for staff parking and event overflow; today, the former Mansfield digs still remain vacant and neglected. Roland Arnall died in 2008; it was Dawn Arnall who eventually sold the place to Woodbridge, in 2016, for the previously mentioned $90 million.

The latest $88 million transfer again ranks Owlwood among the most expensive residential estates ever sold in the L.A. area, though it seems likely the new owner will have to spend another fortune on it — whether they choose to turn the massive, high-maintenance grounds into one cohesive compound or subdivide the property into separate mansion sites.