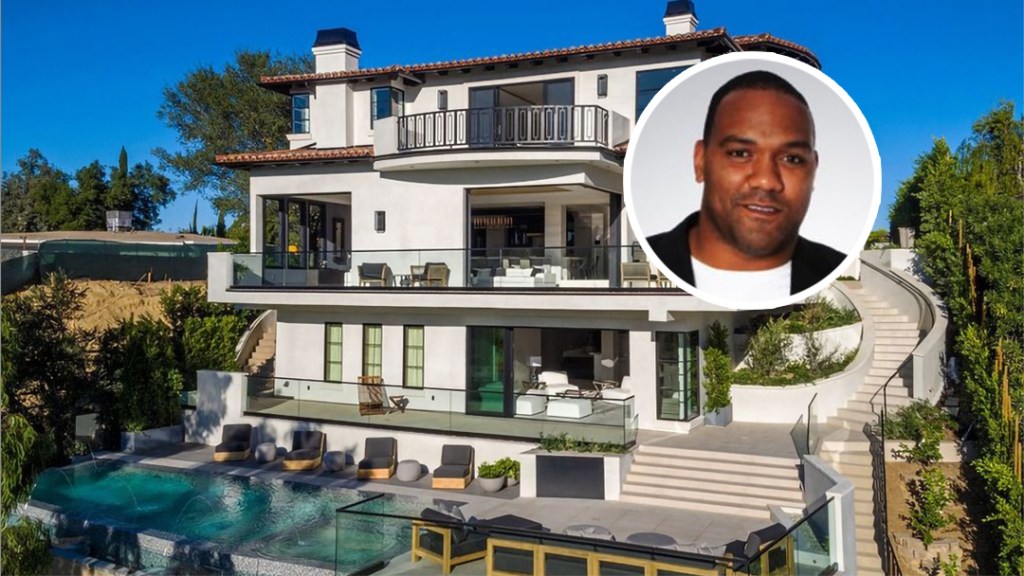 High-flying English sports agent Aidy Ward has made a quick exit from his stateside home in L.A.’s posh Bel Air neighborhood, unloading the 12,000-square-foot mansion barely a year after he moved into the place. The off-market deal rang in at just under $14.1 million, only $75,000 more than Ward paid in July 2019 — a modest profit that quickly evaporates once taxes, realtor fees and other closing costs are considered.

Records reveal the buyer is Jeff Thomas, a prominent real estate developer perhaps best-known for building and selling one of the largest and most unabashedly lavish homes in the Hollywood Hills, a 20,000-square-foot monster that eventually sold for $35.5 million to entrepreneur-turned-YouTuber and motivational speaker Tom Bilyeu.

Originally built in 1950 but essentially razed and rebuilt in 2017, the former Ward estate is perched atop a treacherously steep hillside and stands several stories tall. Secured behind tall black gates, the quasi-contemporary Mediterranean villa-style structure opens into a glitzy foyer with marble floors. In addition to the expected grandly scaled public rooms, there’s a gourmet kitchen with wraparound breakfast bar that connects — via disappearing walls of glass — to sprawling patios and an infinity-edged pool.

The master suite packs in a fireplace, spa-style bath, private balcony and mesmerizing city lights views, and there are six guest bedrooms, all of them with ensuite baths. The fully loaded estate’s treasure trove of amenities doesn’t end there, of course; also on the premises are a soundproof movie theater with mood lighting, multiple marble fireplaces, a gym, a sauna, a putting green, and a subterranean wine room/lounge. And somewhere on the property lies a “hidden panic room,” per the listing.

Ward, 40, is one of the highest-profile agents in English football, having represented superstars like Raheem Sterling, Alex Oxlade-Chamberlain, and Kingsley Coman through his Colossal Sports Management company. He and wife Limara Buchanan, a PR executive, continue to reside primarily across the pond.

The Federal Reserve is likely to hike interest rates again. What that means for you
$3.6MM Luxury House Flip Before & After – Farm House Renovation Before and After, Luxury Home Tour
Manhattan’s office occupancy shows signs of recovery
How to Analyze a Flip in 5 Steps | Real Estate Underwriting 101
Here’s what the Federal Reserve’s 25 basis point interest rate hike means for your money