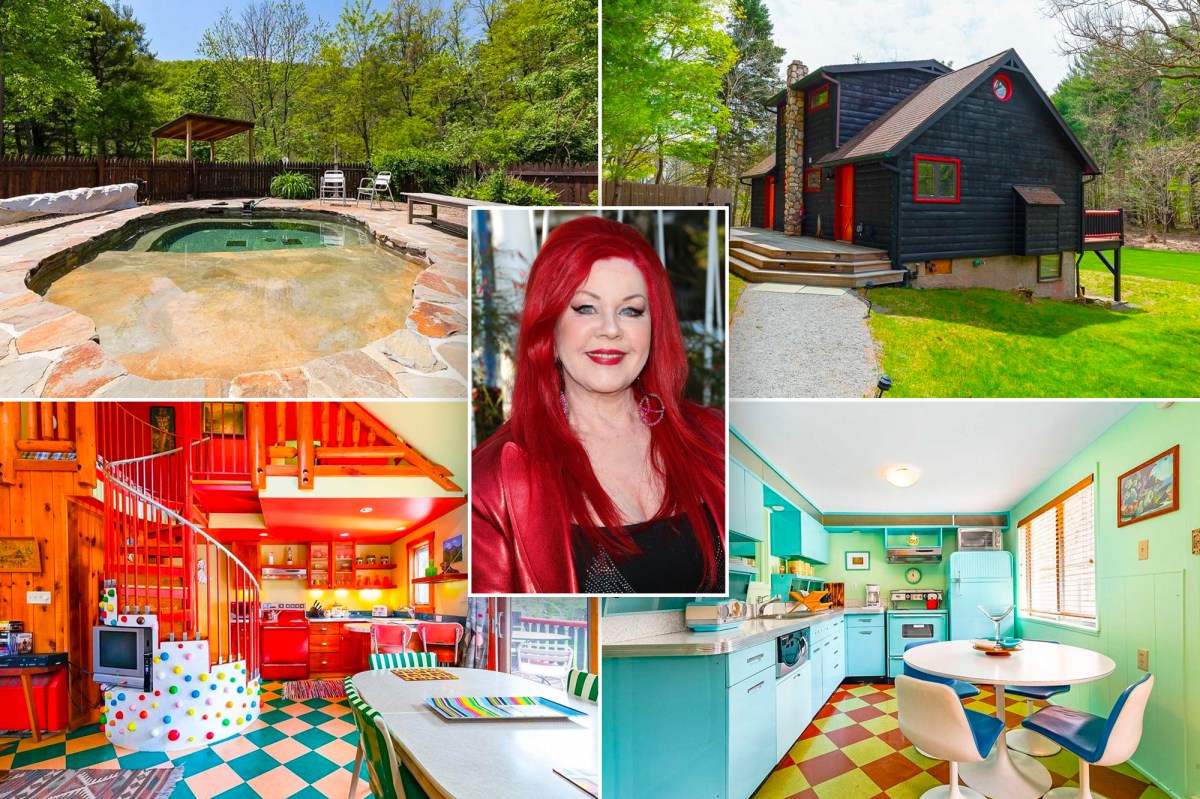 Kate Pierson of the B-52’s, known for 80’s-era hits like “Love Shack,” has listed her motel near Woodstock for $2.2 million — and she promises it’s “just like stepping into the ‘Love Shack’ music video,” according to her website.

The 73-year-old “Rock Lobster” singer rented out the 13-bed, 11-bath lodge called “Kate’s Lazy Meadow” as one of three properties she owns and operates, the “Kate’s Lazy” properties website says.

“As a member of the rock band, The B-52s, believe me, I’ve stayed at them all — from the Four Seasons in LA to the Pink Flamingo Motel in Gatorville, Florida. I do know a motel from a hotel, or a no-tell!” says her host biography on Airbnb.

The rental offers 4,800 square feet of living space in three buildings, offered as three two-room suites and six one-bedroom accommodations, according to Airbnb.

Pierson and her wife, ceramics artist Monica Coleman, restored the property built in 1952 — which Pierson told Bloomberg was her “magic number” — and added a new septic system and a new roof, according to Bloomberg, which first reported the listing.

The house is filled with colorful checkerboard vinyl flooring, wood paneling and plenty of teal and red coloring. One cabin has a polka-dotted spiral staircase that is impossible to miss, photos show. 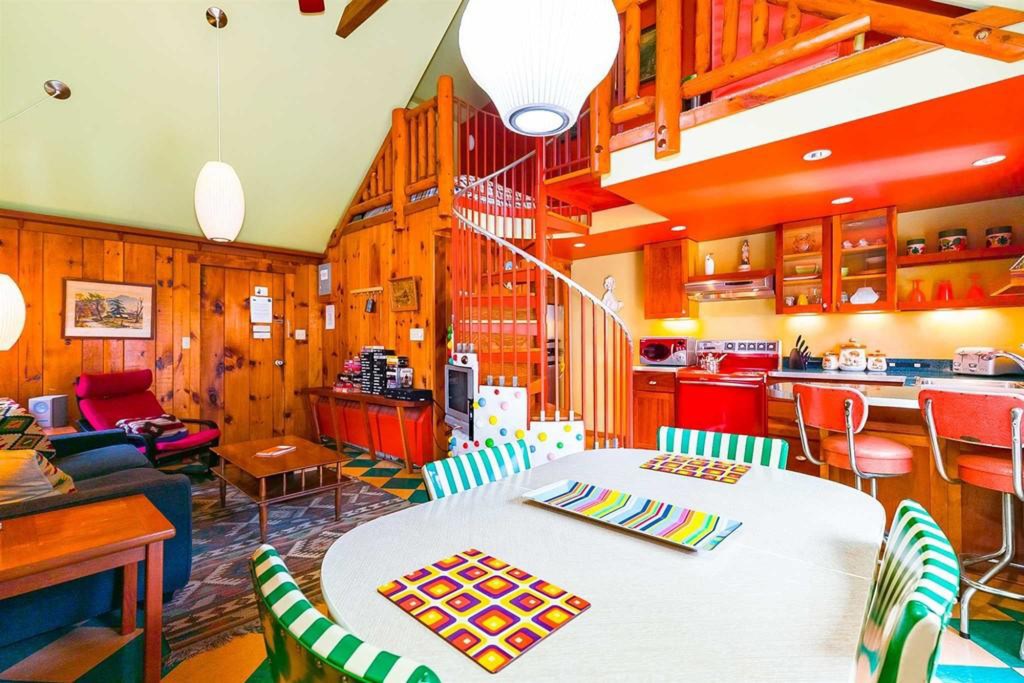 This cabin has two one-bedroom units. 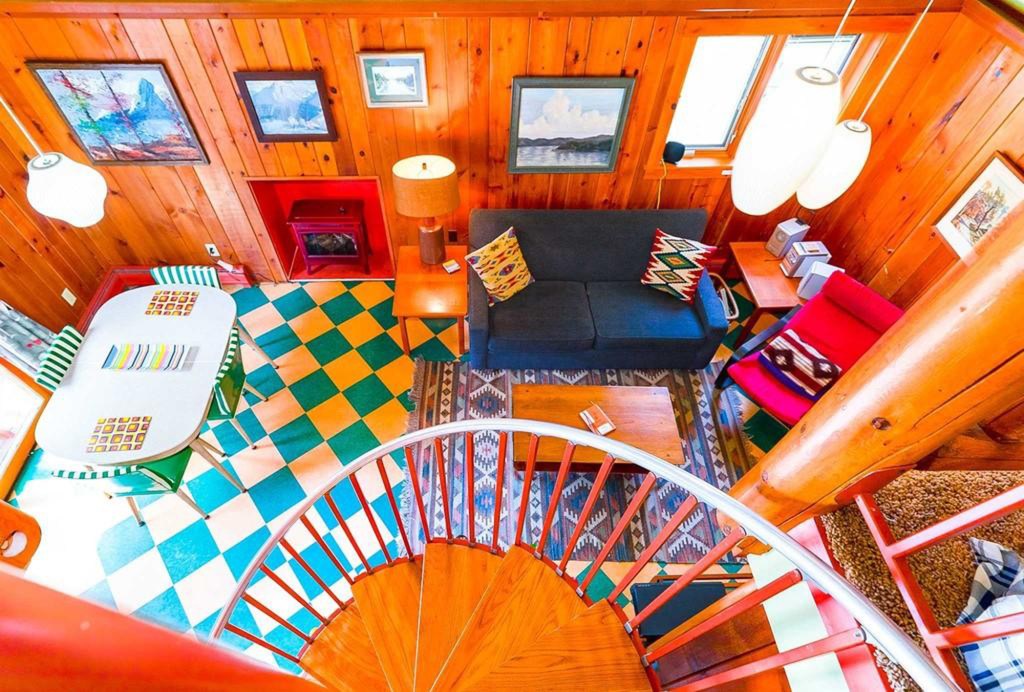 The view from the spiral staircase showcases the teal and white checkerboard floor.

Maybe Brodie Van Wagenen knew what he was doing all…

“This booking really exceeded our expectations for a family new year’s getaway. The interior is eclectic and really cool,” said one guest called Adam in his January 2021 Airbnb review.

The 6.5-acre lot has walking trails, fly fishing and tubing on the Esopus Creek. The riverbank is equipped with running water, electricity and bathrooms for “glamping, airstream trailers or private events,” according to the listing.

“The meadow by the creek in the back [is] absolutely breathtaking. So serene and tucked away. There are cornhole sets, grills, picnic tables and camp chairs, but the fire pit is awesome. It’s HUGE! With four chairs surrounding it and the water running by with the mountains in the background makes for a truly unique experience,” said a review by a guest called Aydar in November 2020.

Pierson, known for her ruby red hair, purchased the estate in 2001 and opened it as a motel in 2004. She and Coleman are selling the property after 20 years of ownership because of their other professional obligations, but they do not plan to sell their other rental properties, according to Bloomberg.

Their other rentals are outside Joshua Tree National Park and nearby their “Lazy Cabin” digs in Mink Hollow, New York, according to Airbnb listings.

Kate Pierson is most known for her 80’s music with the B-52’s alongside Fred Schneider, Cindy Wilson, Ricky Wilson and Keith Strickland.

Why U.S. Real Estate Is So Flawed | CNBC Marathon
Manhattan’s office occupancy shows signs of recovery
Why We Are Entering The Best Real Estate Market Opportunity Since 2008
This is getting really SCARY! | Redacted with Natali and Clayton Morris
4 Ways to Invest in Real Estate with NO MONEY in 2023