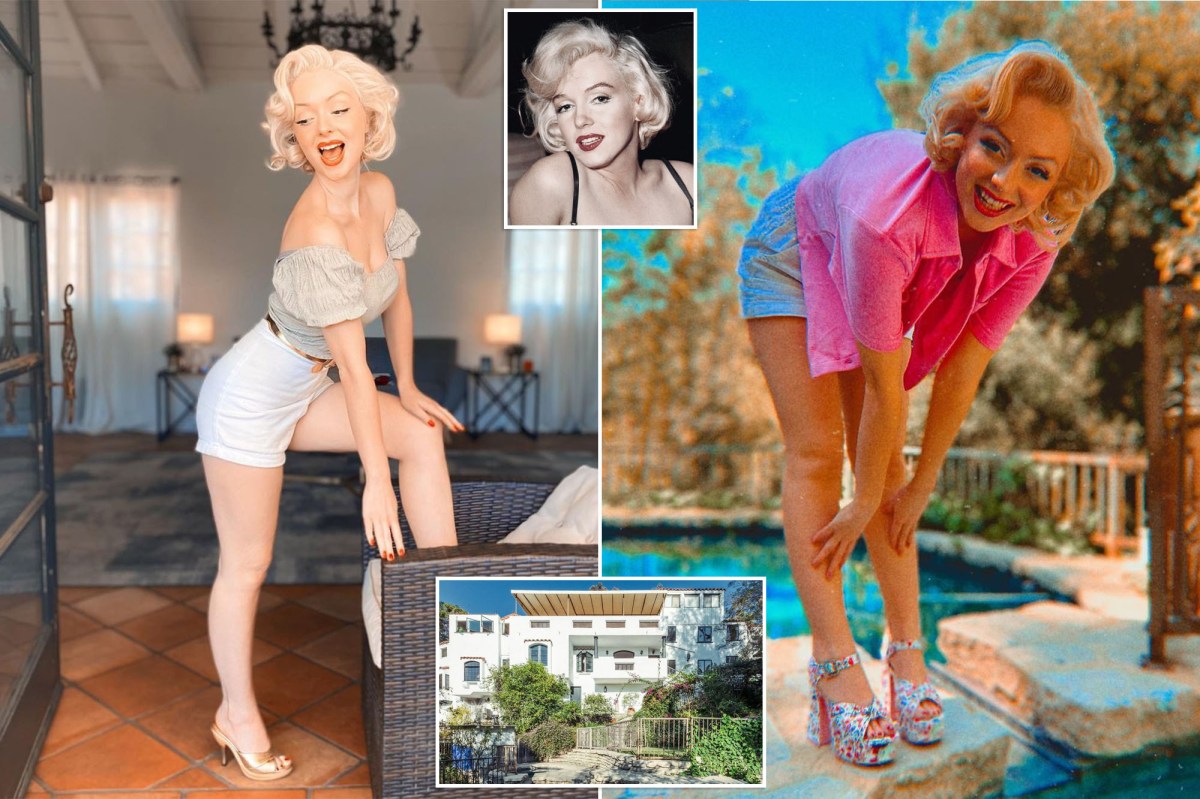 When Marilyn Monroe was briefly married to Joe DiMaggio in 1954, they moved into a quaint honeymoon Mediterranean-style home in the heart of Hollywood. About 65 years later, a lively Monroe look-alike and her husband bought that very house.

Scottish-born Jasmine Chiswell, 27, is a dead-ringer for the late “Some Like It Hot” star, who would have turned 95 on Tuesday. The blonde bombshell’s bubbly smile and chic vintage style — and the fact she lives where the iconic sex symbol once resided — has earned her 11.6 million followers on TikTok alone.

Chiswell, who is expecting her first child with her husband Maverick, told The Post she fell into this character accidentally after the couple purchased the home about three years ago.

“I’ve always loved vintage fashion since I was little, but I didn’t want to get judged or stand out, so I always told myself maybe one day I’ll have the confidence to do so,” she said.

In 2018, Chiswell and her husband, who is a music producer, were driving around Hollywood house-hunting and stumbled upon a home in the exclusive Outpost Estates area near the Hills.

“My husband looked online and saw that the house was actually one of the ones where Marilyn lived and it was one of the open houses for sale,” she said of the house, which overlooks Runyon Canyon.

“We fell in love with it immediately,” she added, “Not just because it was Marilyn’s house, but it also reminded me of Scotland in a really bizarre way.”

The couple moved into the four-bedroom, four-full-bathroom home at the start of 2019, which they purchased for $2.73 million.

Reminiscent of the Amalfi Coast, the 3,335-square-foot home boasts canyon views from all rooms, a huge terrace that expands from the living area which provides a place for al fresco dining and a grotto-like pool and spa.

Monroe, who died in 1962, took up residence in the home for a few years before marrying DiMaggio in 1954. The couple lived there together for nine months before their divorce, which was around the time she went to New York to film “The Seven Year Itch.” After their divorce, the “Gentlemen Prefer Blondes” actress married playwright Arthur Miller and moved to the Big Apple. She was found dead of a barbiturate overdose inside her last home in Brentwood.

Despite living in Monroe’s home decades later, Chiswell was confused as to why there were so many items left behind in the home that were not cleared out, including an incinerator she found with two magazines dated back to the time when Marilyn and Joe lived there.

“You could see that someone had drawn circles on parts of the magazine, and it could’ve been Marilyn or Joe’s writing,” she said.

While her TikTok and social media profiles are cheery videos and photos of her pristine pin-up life, Chiswell revealed that since moving into the house, they’ve had “a lot of weird things happen,” including hearing footsteps every night as they try to sleep.

“We do hear footsteps most nights. We have tried everything,” Chiswell explained. “We are like ‘It can’t be animals.’ We had someone come in to check the real estate and nothing. I know our dogs go into hallways and it’s like someone touches them and is patting them.”

“In the beginning, my husband and I were a bit scared, but that energy does not feel bad, it feels happy, we don’t mind it anymore.”

While Chiswell lives and breathes Marilyn Monroe, she said her look only really began to transform in 2017 when she stumbled upon an “old-fashioned store in Los Angeles” that gave her inspiration.

“It made me realize I wanted to try the hair and makeup and see how it goes,” she said. “It took me a while to get my hair that way, and the makeup with the clothes.”

Chiswell explained that she initially worked with some of her modern clothes to make it vintage and built her closet from there. She then realized her hair had been too long to create that ’50s vibe and so had to cut it — and that’s when the Marilyn comparisons began rolling in.

“I made it really short, and had it blonde, and I didn’t think about it at the time, but I was dressing vintage and I was getting stopped in the street with people telling me, ‘Oh my God, you look so much like Marilyn Monroe,’” she said, “so it wasn’t intentional at first, it just kind of happened.”

Today, Chiswell has built up a huge social media following where she is constantly vlogging about her journey of dressing the part.

“This is my full-time job. It has really changed my life in the best way,” she said. “The community I’ve built, we are like family.”

Her husband, Maverick, elaborated on some of the more bizarre social media requests Chiswell deals with from her many fans.

“As far as direct messages, she gets a bunch of weird s–t — not your typical weird one, like feet, but some people will just ask her for her big toes … one toe.”

Despite the creepy requests, Maverick supports her fully and even joined in on dressing vintage on occasion.

“We always go shopping, and I always say I’ll never dress vintage,” he said. “I thought it looked cool on women, but on men, I thought it would look stupid. But you know it’s grown on me.”

Mortgage demand rises 2.2% as interest rates decline slightly
US Housing Markets Plateauing, Slowing, Falling to Obliteration: Housing Bubble 2.0 – Housing Crash
So THIS is how they plan to screw these companies, from inside out | Redacted with Clayton Morris
Buyer Cancellation Rates Surge for New Homes
New COVID information you’re not going to believe!